Sociological research indicates that Americans remain more religious than adults in other industrialized nations. As a result, it is not surprising that many events in our country are deeply connected to religion and spirituality. Yet while religion remains a vital force in American culture, Americans are increasingly ignorant about the beliefs of their neighbors. Such ignorance not only promotes suspicion and hostility but makes us less able to appreciate our diverse identities. How can we learn more about our neighbor’s religious beliefs and practices in ways that improve understanding and display curiosity and respect? 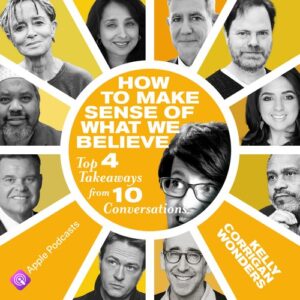 In 2021, New York Times bestselling author and leading podcast host, Kelly Corrigan, produced a ten-episode series to model how to have deep, meaningful conversations with others about spiritual topics.

The radio and podcast episodes, supported by a $175,000 grant from AVDF, provide listeners with authentic examples of how to engage others who hold different beliefs from their own and leave those discussions with increased appreciation and understanding. The series features conversations with a range of thought leaders, writers and celebrities.

In each episode, Corrigan interviews a guest representing different faith perspectives. The series kicked off with AVDF President and CEO Michael Murray discussing the “social science of faith.” In another episode, Corrigan talks with Anthony Ray Hinton, an American activist and author who was wrongly convicted of murder in Alabama in 1985. Hinton was exonerated after 30 years in prison and credits his faith for his resilience through incarceration. Actor Rainn Wilson, known for his role as Dwight Schrute in NBC’s The Office, shares his journey to the Baha’i faith.

“The support of the Arthur Vining Davis Foundations made it possible for Kelly Corrigan Wonders to spotlight how belief brings meaning and vibrancy to our lives. We hope the episodes motivate listeners to actively seek out the diverse views of friends and neighbors in ways that promote deep and lasting relationships,” Corrigan said.

Reviews of the podcast series reveal listeners came to appreciate new faith perspectives and learned to be more open and understanding when conversing about beliefs. The series provides diverse points of view, helping listeners to wonder more and judge less.

“Kelly Corrigan’s series shows us all how we can better understand and appreciate the spiritual values and motivations of our neighbors. By having these deep conversations with others, we can start to remove barriers of division and create opportunities for shared awareness,” said AVDF Director of Programs John Churchill.

The 10-part belief series was produced in conjunction with the Bay Area public media station KQED and was sponsored and distributed by PRX. After production, Corrigan worked with KQED and PRX to engage college and university students to learn how to have deep conversations about belief with friends and family. She partnered with Interfaith America for a workshop during the organization’s annual gathering in August 2021 to demonstrate how to talk about belief in the classroom and within communities. The series formed the basis of a freshman seminar course on religion at Villanova University.

The series on belief is available on all major podcast platforms and has eight subscriber stations around the country. To date, each episode has about 135,000 listeners and approximately 50,000 downloads. The episodes featuring Hinton and best-selling author Anne Lamott remain among the top five of all podcasts produced by Kelly Corrigan Wonders.

Kelly Corrigan has appeared on PBS and the Today Show and has written for numerous outlets including O Magazine, Good Housekeeping, and the New York Times. She launched Kelly Corrigan Wonders in 2020 to examine important aspects of lived human experiences through engaging storytelling. The podcast series has been downloaded or streamed by more than 1 million listeners. Kelly Corrigan Wonders ranks in the top 1% of podcasts and has a rating of 4.9 out of 5.0 stars on Apple Podcasts.