Since the launch of public television, AVDF has supported high quality television programming that aims to educate children and adults.

In addition, public media currently plays an important role in the domains of radio and podcasting, and AVDF has expanded funding to these other domains. We support efforts by public radio stations to fill gaps in local journalism, especially in markets that are losing local newspapers. And we fund the production and distribution of podcasts that focus on history or science, that are aimed at a youth audience, or that promote one or more of the Foundations’ Program Areas.

Film and television grants are typically provided to non-profit production companies or public media stations for programs that have a firm commitment to national distribution. While projects funded by the Foundations concern a variety of subjects, supported programs typically focus on science or history, or have American youth as a primary audience.

AVDF is not currently accepting letters of inquiry (LOIs) for this funding area.

Film and television grants typically range from $100,000 to $300,000, although the Foundations will consider larger requests. Grants may support projects that span multiple years. 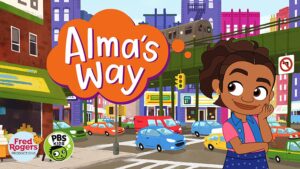 Alma’s Way is a new animated series for preschoolers that features 6-year old Alma Rivera who lives in the multicultural neighborhood of the Bronx with her multi-generational Latino family. Produced by the Fred Rogers Productions, Alma’s Way premiered in October 2021 as the #1 PBS KIDS series among kids 2-8 on television and streaming video. The episodes feature Alma’s Puerto Rican family, her Cuban Uncle Nestor, and her friends in the Bronx who are Dominicans, Colombians, Mexicans and other Latino groups.

The program aims to help children develop self-awareness, skills for responsible decision-making, cultural awareness, and empathy. In addition, Alma’s Way aims to help young Latino viewers feel more represented in the programs they watch, and to help non-Latino viewers better understand and welcome Latinos in their communities as neighbors, friends, and family. Alma’s Way includes a website, a mobile app, and other digital content in both English and Spanish.

WETA
The U.S. and the Holocaust, a film by Ken Burns, Lynn Novick and Sarah Bostein
Premieres September 18, 2022 (Click the arrow below to learn more)

WETA
Making Black America: Through the Grapevine
Premieres October 4, 2022 (Click the arrow below to learn more)

PRX
TRAX Podcast: The Genius Generation, a podcast series for tweens
2nd Season Premiered in 2022 (Click the arrow below to learn more)

WETA
On Our Minds, a student-led podcast about mental health
Premiered in May 2022 (Click the arrow below to learn more)

PRX
All Together Now, Kelly Corrigan podcast about climate change
Premiered in July 2022 (Click the arrow below to learn more)