A River Focused Investigation of our Changing Planet 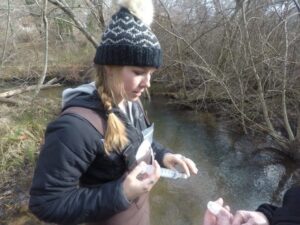 The grant supported sampling at the Cape Cod Rivers Observatory and international sampling on the Congo, Amazon, and Lena Rivers. The project involved undergraduate students in research through internships at WCRC and in the Polaris Project. According to the grantee, progress on all of the goals met or exceeded the expectation of the project team. During the period of the grant, sampling dramatically expanded – from 18 rivers at the start of the grant to 78 rivers at the conclusion. In addition, WCRC reports they have streamlined their sampling protocol and made sampling activities more accessible to citizen scientists who wish to engage in the work – which has engaged more of the public in the science and allowed them to increase sampling activities

Through the project, WCRC was also able to generate significant public engagement through a 60 Minutes news story and the release of a book by Dr. Max Holmes entitled The Big Thaw. According to the grantee, 60 Minutes viewership averages 11 million people, and the story has been aired four times. They further report that through presentations hundreds of students have been reached and thousands of scientists have been exposed to the research through data use or conference presentations.

One exceptional success from the grant involved the development of a Quality Assurance and Project Plan (QAPP) for the Cape Cod Rivers Observatory. As part of the AVDF proposal process, AVDF asked WCRC to consider best practices they could and would adopt for the project. WCRC reports that they have not utilized formal QAPPs on other projects, but the use of a QAPP for the Cape Cod Rivers Observatory sampling has made the data collected more useful in policy and regulatory arenas.

Another success reported relates to the undergraduate internship experience of an African American student in summer 2018 on which we have reported previously. The student’s experience with a WCRC internship and subsequent participation in the Polaris project led her to pursue a PhD at the University of Texas doing Arctic research. As WCRC notes, there is a “near total lack of Black women in the Arctic research community,” and thus the student’s pursuit of her PhD is “an exciting and important development.”