On November 1, 2022, The National Academy of Television Arts and Sciences (NATAS) announced the nominations for the first annual Children’s & Family Emmy® Awards. The special awards program is the first standalone expansion of the Emmy Award competition since 1979. 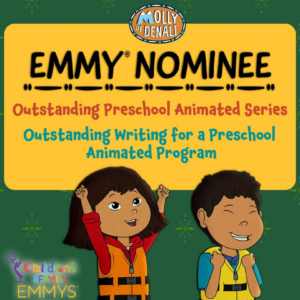 Among the nominees are the AVDF-funded programs Molly of Denali, Alma’s Way, Daniel Tiger’s Neighborhood and Donkey Hodie.

The GBH-produced Molly of Denali children’s programming launched in 2019 and is an action-adventure comedy that follows resourceful 10-year-old Molly Mabray, an Alaska Native girl. The Peabody Award-winning series broadcast its second season in the fall of 2021 and the spring of 2022.

Alma’s Way, produced by Fred Rogers Productions, launched in 2021 and is an animated cartoon that was created by Sonia Manzano, “Maria” from the long-running children’s program Sesame Street. The main character, Alma, is a six-year-old Hispanic New Yorker. Alma’s Way was a winner of the 37th Annual Imagen Awards for Best Youth Programming. The awards program recognizes positive portrayals of Latinos in the media.

Donkey Hodie, also produced by Fred Roger Productions, is a live-action puppet program based on a character from the original Mr. Roger’s Neighborhood. Donkey Hodie ranked #1 this past June for children ages 2 – 8 among broadcast television programs. The series has reached nearly 180 million streams since it launched in May 2021.

The Children’s & Family Emmy® Awards will be presented on December 10 and December 11 at the Wilshire Ebell Theater in Los Angeles. Visit the National Academy of Television Arts and Sciences for the full list of nominees.