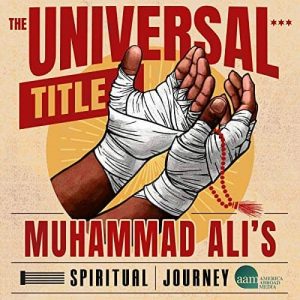 The Universal Title is a six-part radio and podcast series about the spiritual evolution of the legendary athlete, Muhammad Ali, and the ways that this journey shaped his life and career. Produced by America Abroad Media and in partnership with PRX and the Muhammad Ali Center, the series highlights Ali’s Islamic faith in a way that other narratives about him have not. The podcast series tells the story of Ali’s remarkable spiritual journey—from a Baptist Christian upbringing, to a heterodox Muslim faith under the Nation of Islam, to more mainstream Sunni Islam, to a Sufi Islamic orientation—as a way of showcasing the “power of religion to promote tolerance, a sense of humanity, and civil discourse.”

Hosted by Preacher Moss, the series will illuminate the ways in which Ali’s religious understanding was influenced by Muslim immigration. The podcast and radio episodes will also use Ali’s story to explore the African American Muslim experience more generally.