Investing in the Future of Democracy- BridgeUSA

Effective democracy requires that citizens treat each other as equals. Among other things, this requires an ability to engage one another productively when we differ. Yet numerous social forces make it increasingly difficult to acquire or sustain these abilities. And this is true not only among older Americans but also among those who are at more formative stages of high school and college.

Heightened political polarization and trends such as cancel culture on campus contribute to students’ refusal to listen to viewpoints that differ from their own. A College Plus survey found two-thirds of students believe it’s acceptable to shout down a speaker with whom they disagree, and nearly a quarter of students say violence against such speakers is acceptable.

Unfortunately, these attitudes sometimes translate into action, with catastrophic consequences.  In 2017, protests at U.C. Berkeley resulted in $100,000 in damages to campus property when students became enraged by the planned visit of the provocative commentator Milo Yiannopoulos. In the wake of these disturbing events, a group of university students formed BridgeUSA, an organization committed to creating a space for civil discourse about topics that divide us. 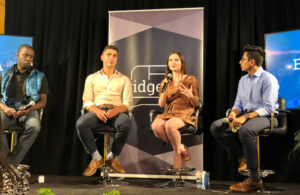 BridgeUSA has since spread as a grassroots movement with chapters at fifty college campuses across the United States. While many college-civic-engagement activities fail to provide opportunities for constructive dialogue between students across lines of difference, BridgeUSA tackles this challenge through community-based forums where varying opinions are expressed in a non-confrontational manner.

AVDF supported the growth of BridgeUSA with a $195,300 grant in 2021; based on the organization’s impressive achievements AVDF recently awarded BridgeUSA a second grant of $400,000 for the next two years.

“BridgeUSA has designed a program that provides college students with civil discourse skills, and opportunities to practice those skills. The opportunity to have courageous, vulnerable conversations helps students develop into citizens who can navigate an increasingly diverse national landscape,” said AVDF Senior Program Officer Annie Bryan.

The student-led BridgeUSA college chapters promote viewpoint diversity and develop skills of constructive engagement. Students learn the value of listening to understand alternative viewpoints, even when it challenges their own.  The organization found that many students desire opportunities for open dialogue but fear retribution from their fellow peers if they reveal their personal beliefs.

With the help of AVDF funding, BridgeUSA engaged 1,200 students in the fall of 2021 through activities such as nationwide student forums, speaker events, and community-focused meetings. In addition to facilitating engagement between chapter members, BridgeUSA works with colleges and universities to shape policies related to civility on campus.

“BridgeUSA creates opportunities for students to have productive conversations about political and social issues across diverse ideologies. AVDF funding enabled us to establish an additional 31 BridgeUSA college chapters in 2021. Student interest remains high, and we expect to launch 50 new chapters in the next two years,” said BridgeUSA CEO Manu Meel.

BridgeUSA remarkable growth has brought widespread recognition. They have received endorsements from Interfaith America Founder and President Eboo Patel as well as social psychologist and author Jonathan Haidt. They have further succeeded in establishing partnerships with leading civil discourse organizations including Braver Angels and A Starting Point, founded by The Avengers actor Chris Evans. BridgeUSA has also been covered by several media outlets including USA Today, NBC and CBS. BridgeUSA CEO Manu Meel was featured in Forbes’ 30 Under 30 list in 2021.