As the United States becomes more diverse and the global economy increasingly data- and science- driven, a nation-wide shortage of women and minorities in the sciences has become increasingly evident. African-Americans, Latinos, and Native Americans represent around 32 percent of the general U.S. population but earn just 22 percent of science and engineering bachelor’s degrees and make up just 13 percent of the STEM workforce. And while women have caught up to men in degree attainment in some disciplines, they constitute only 28 percent of the STEM workforce. 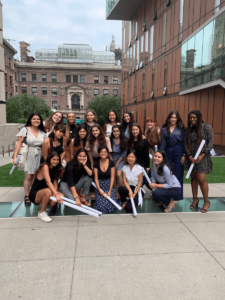 This lack of diversity in the sciences is caused by “leaks” all along the STEM pipeline, including at the undergraduate level. Under-represented students enter college interested in science, technology, engineering, and math at the same rate as their peers, but they are less likely than their peers to persist in these majors and to earn STEM degrees. This imbalance could be due to many factors, including poor science preparation in high school, inadequate advising, negative campus experiences, and cultural factors such as stereotypes that affect students’ perceptions of their own abilities.

To address this imbalance, Barnard College, a private women’s college in New York, created the Science Pathways Scholars Program. Nicknamed “(SP)2,” this program supports under-represented and first-generation students in the sciences at Barnard. The program, which has been highly effective thus far, will continue to be supported by a two-year, $300,000 grant from AVDF. The program features a pre-matriculation summer bridge program, faculty mentoring, research opportunities, and more.

As evidence of its effectiveness, the applicant pool in 2019 alone grew 33.1 percent, with more than 440 high school seniors applying for 8-10 spots. Since its inception, students in the program have a retention rate of 89 percent. And among the Scholars who have declared majors, 86% are in the sciences.

“We are very pleased to be able to support Barnard’s work to promote equity and inclusion in the sciences,” said AVDF Director of Programs, Dr. John Churchill. “Projects of this sort directly advance AVDF’s commitment to educational opportunities for all students.”

Promoting Inclusion within the Marquette Internship Program
The Dominican Experience: A Distinctive Program Model of Innovation with Capacity for Replication
Periclean Faculty Leadership Program in STEM and Social Sciences